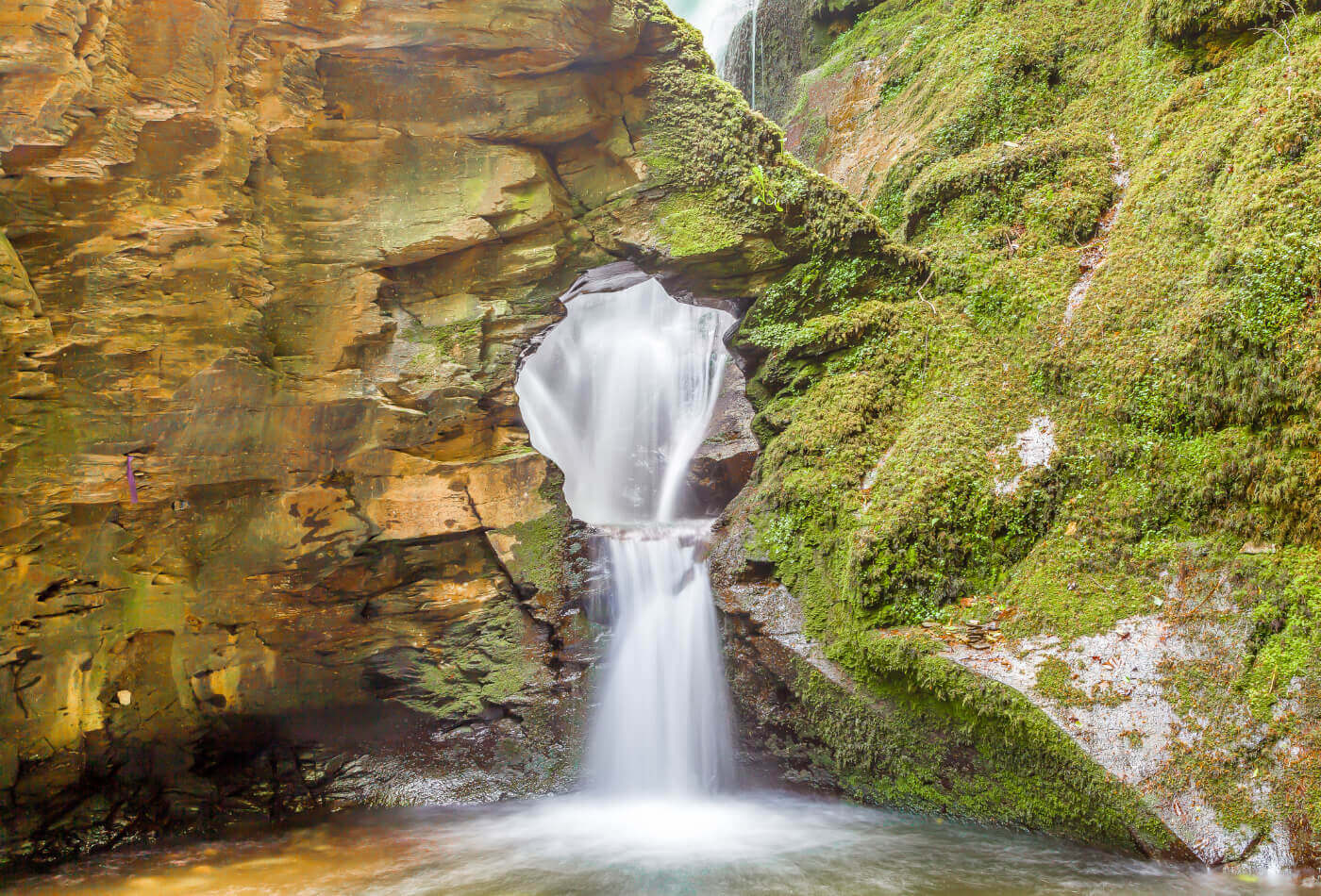 If you’re seeking beauty in nature, find it in abundance at these waterfalls in Cornwall.

The ocean isn’t the only incredible water feature in Cornwall. Cornwall’s waterfalls are scattered throughout the county, with lots of them hidden and unknown to most.

Waterfalls in Cornwall come in all shapes and sizes. From gentle drops amidst enchanting woodland, to cascading streams over sheer cliffs.

We’ve selected 7 of the best Cornwall waterfalls for you to visit on your Cornwall holiday cottage adventures.

Read on to discover the best waterfalls in Cornwall… 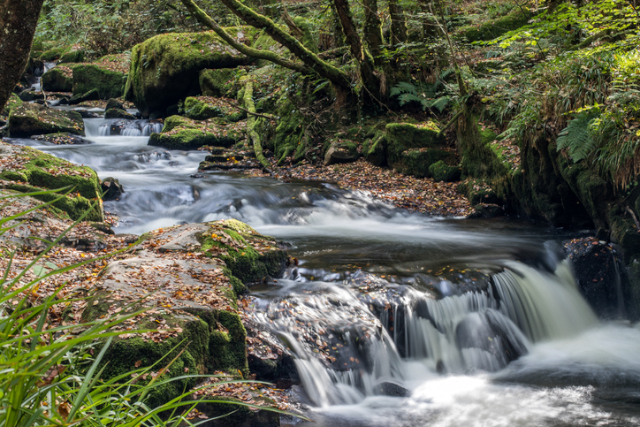 Golitha Falls are a series of mesmerising waterfalls and cascades found within Draynes Wood on Bodmin Moor.

They lie along a section of the River Fowey, and are probably the most well-known waterfalls in Cornwall.

The best time to visit Golitha Falls is after a heavy rainfall on the moors. Using a long exposure on a camera, you can capture beautiful images of the milky, cloudy like waters flowing over the riverbed.

The falls rest near the village of St Cleer, not too far from the town of Liskeard.

It’s a wonderful walking spot and you can park at Draynes Bridge around half a mile from the falls. 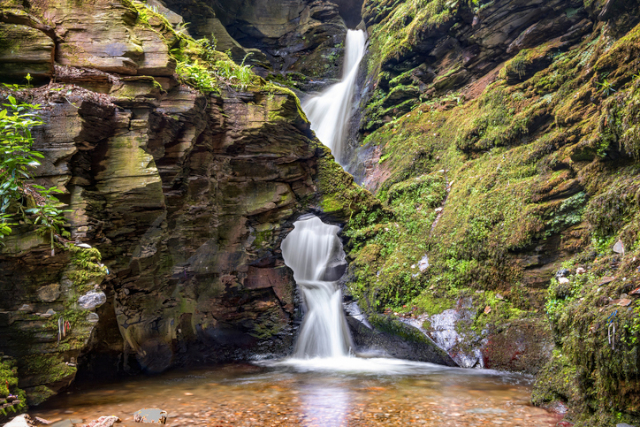 St Nectan’s Kieve is the most popular waterfall in St Nectan’s Glen, an unspoilt haven of nature.

This waterfall near Tintagel is a magical thing to behold. The kieve, or basin, at the bottom of the waterfall has been rounded over the years by the force of the water and is 20 feet deep.

This plunge pool is filled by the 60 foot high waterfall which is fed by the River Trevillet. The water passes through an arch which has been formed from the degradation of the rock.

It creates an awesome natural attraction!

St Nectan’s Kieve is not the only waterfall in St Nectan’s Glen too. Explore the myriad of trickling and cascading waters in this Site of Special Scientific Interest, located in Trevethy not far from Tintagel and Rocky Valley. 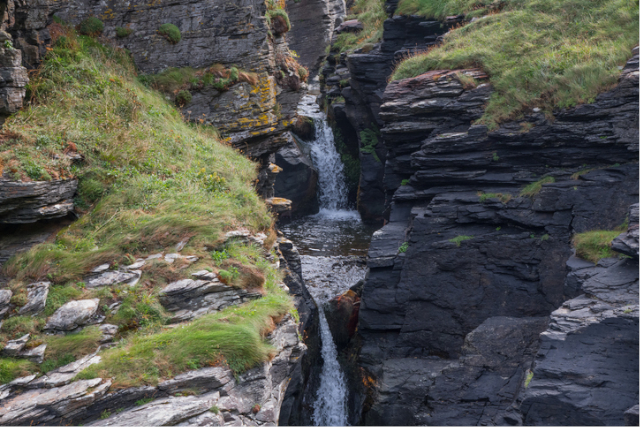 Embark on an epic walk along the South West Coast Path through Rocky Valley and encouter waterfalls, cauldrons and gorges!

Rocky Valley can be found nestled between Tintagel and Boscastle on the North Cornwall coast.

Over time, running water along a fault line caused the steep-sided and craggy degradation of slate.

Follow the public footpath which follows the River Trevillett all the way up to St Nectan’s Glen, or enjoy a coastal amble along the South West Coast Path.

Rocky Valley is also a biologically important site, as well as being a hotspot for waterfalls in Cornwall. It is home to around 161 species of moss!

Steeped in legend, Lansallos waterfall is a tranquil stop along the coast.

This Cornwall waterfall flows into Lantic Bay and is relatively small but still well worth a visit.

Once the site of a former mill, legend has it that a half-drowned man sought refuge at the mill one night. The miller’s wife refused him help, and the next day the man was found dead outside. His ghost haunted the mill and drove the couple to move away!

Nowadays, it’s a beautiful stop to make on a walk along the South West Coast Path between Fowey and Looe.

Make an unforgettable trip to the Eden Project and see this beautiful Cornwall waterfall.

The Eden Project lies in Bodelva, near St Austell and is the most visited attraction in Cornwall. The overall complex is dominated by two huge biome enclosures, which house thousands of plant species.

One of the biomes houses a tropical rainforest climate and the plants and fauna to go with it. This is where you can find the waterfall.

Pass along the wobbly rope bridge, come to the waterfall, meet the roul-roul partridges roaming free around the biome, and discover an authentic Malaysian House at the heart of it.

Discover one of Cornwall’s hidden gems in Pentargon waterfall, dropping down over 100 feet!

Just north of Boscastle along the coast, you’ll find this spectacular sight. Pentargon waterfall is a hanging valley; in other words, the river has failed to erode a path down to the shore, leaving it to plunge down the cliff to the sea.

The waterfall spills down a distance of 120 feet and is best when there’s been heavy rainfall. To reach this Cornwall waterfall, walk up from Boscastle harbour and follow the slope of the hill to Penally Point.

From there, turn north and follow the contour of the coast. You’ll see the waterfall ahead of you and there’s a natural viewpoint to enjoy the best view of the torrent.

Discover the remains of Cornwall’s mining history amidst ancient woodland and waterfalls.

Luxulyan Valley rests near the village of Luxulyan, near St Austell and St Blazey. The Par River runs through this beautiful woodland alongside the ruins and remains of the mining industry.

Find remains of horse drawn mineral tramrods, a huge water wheel, and leats to carry water. The biggest of them all is the ten arch Treffry viaduct, standing 100 feet high.

The Luxulyan Valley waterfall has formed around the disused waterwheel system. This Cornwall waterfall is a real treasure to come across, among many more enchanting areas of this hidden gem.

We hope you’re feeling as inspired as we are to search the Cornish landscape for these beautiful Cornwall waterfalls.

Pair these adventures with visiting famous landmarks in Cornwall. Or, why not go in search of culinary delights using our best vegan restaurants in Cornwall guide?

Hi, I’m Alice! Since joining the Sykes family in April 2018 my love for UK staycations has only increased. From the beautiful be... 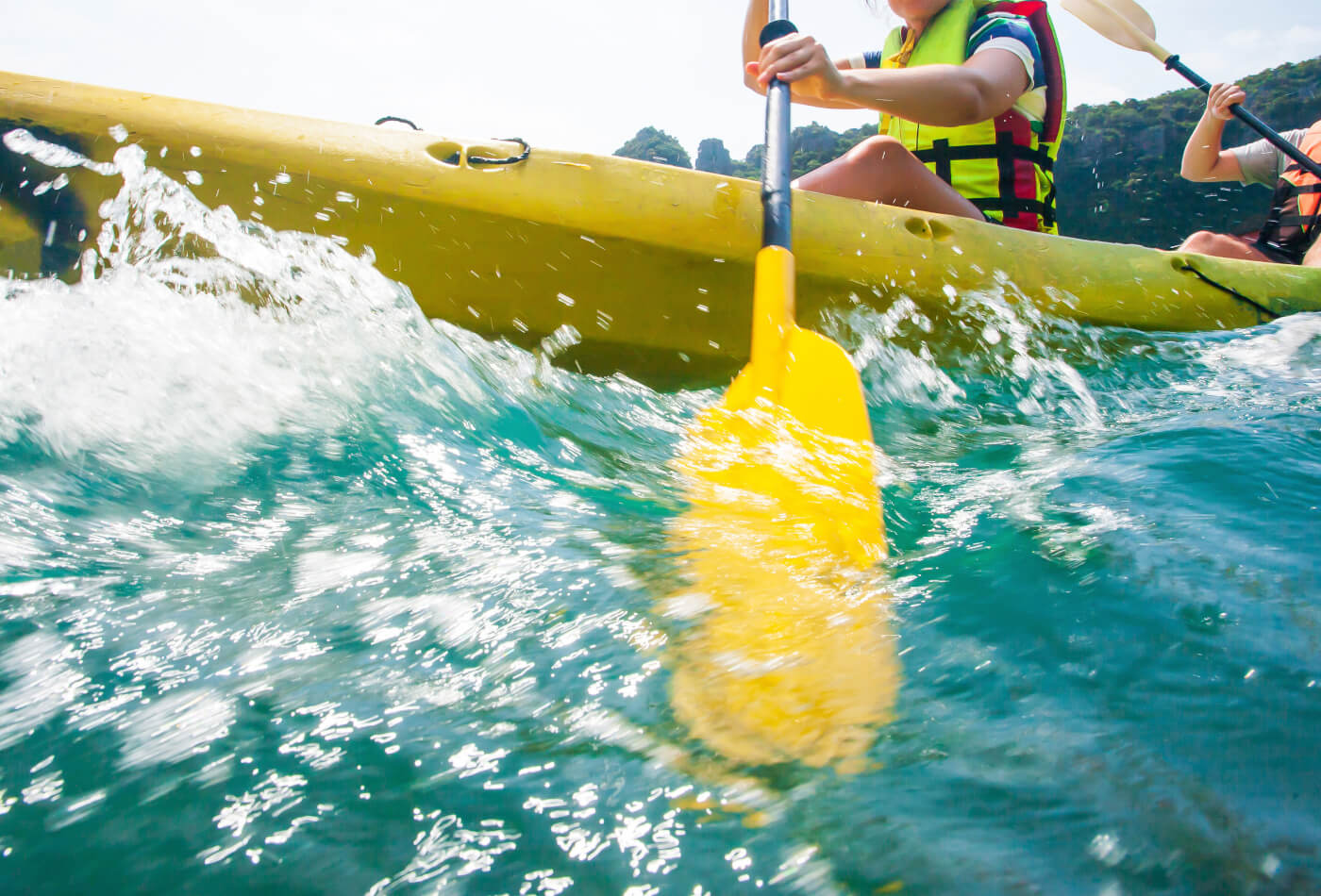 Kayaking in Cornwall: Kayak hire and where to go

Experience kayaking in Cornwall and discover the best way to explore the wondrous Cornish coast! Whether a seasoned paddler,... 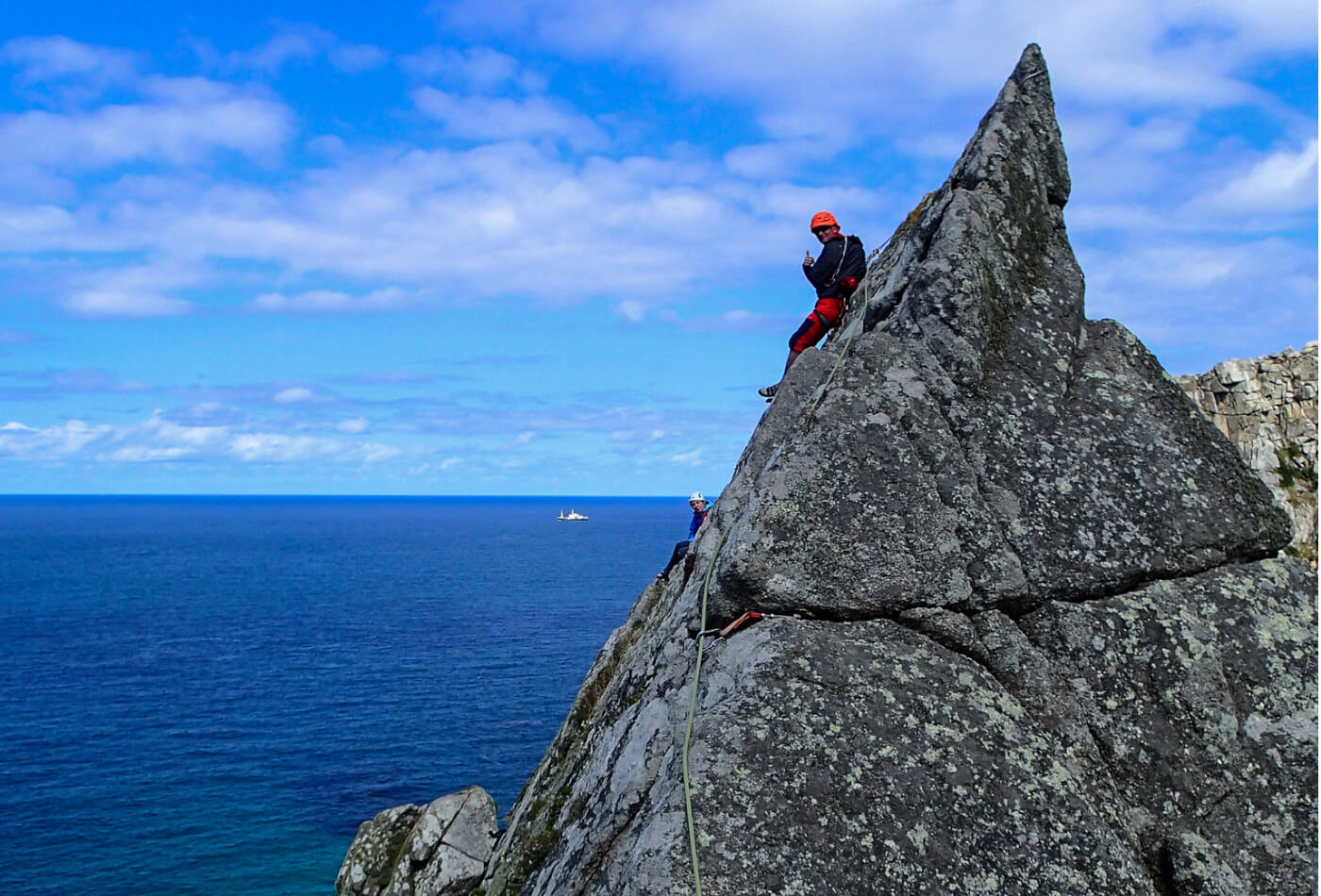 Climbing in Cornwall: A Guide on the Best Locations 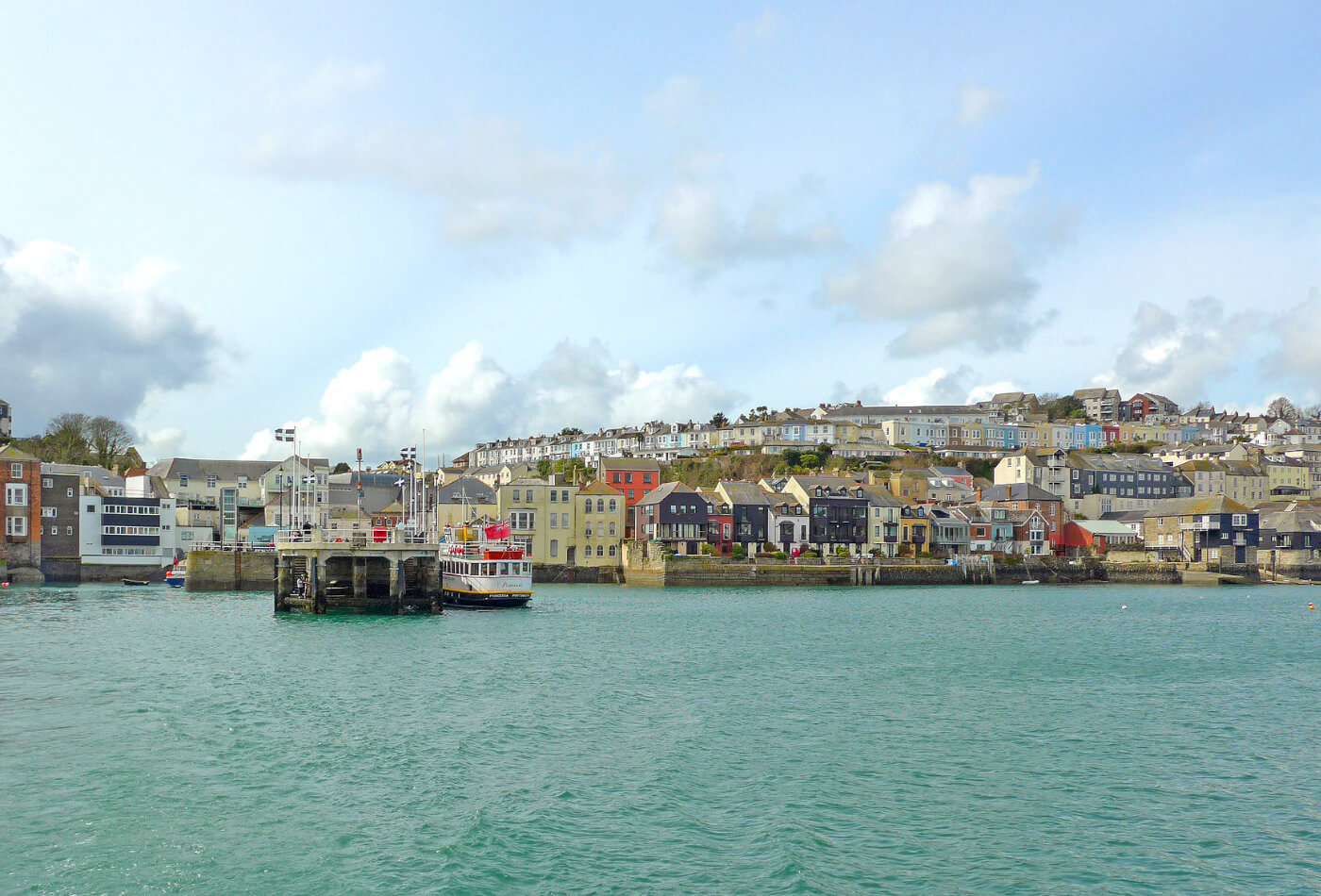 Top 6 Things to Do in Falmouth

Enjoy these things to do in Falmouth and get to know one of Cornwall’s most popular harbour towns! Falmouth...